The score stretches in space condensing complex images. One could also say that the rarefying can form a condensation of images in the folds.
The space is not all, a kind of excess of space where images ruin in the same way in which they repeat themselves.
These aggregates, swarms on the verge of the storm, ceaselessly call for a contiguity without determinations in orientation, form or composition: deep down, maybe, a purely superficial question. And in each element the surface tension catches on again, making the images unravel and recompose in different aggregates. It’s clear that we’re concerned with breaks rather then scrolling, and that nonetheless a kind of movement is implicated in it and not as an aversion. Without having yet gathered speed, we drove maybe far beyond, so we try to move back.

It seems that far before the circumscription of the camp, the tongue of sand’s dunes close to the sea naturally secured the access to water for the ones coming from the hinterlands. Because if “in a whatever land there is a dip, or a rise or even a slope, this does not constitute any serious proof for letting us say that there is a cut, or a natural bind between one centre and another. The slopes or the height differences are instead caused by the permanent modifications of the sand’s fields, by the wind coming from the sea, that wind which here always blows from east and which continuously shifts the dunes from one point to another”. And yet in another time and in a place – that hardly we can recognize as the same – the lands to which just after the name mouchaa, undivided, was attributed, were crossed without any hindrance.
Some were also stopping there, during the night, camping with tents, or coming back from fishing they would have found refuge. Some others used to collect herbs or to pasture the cattle. Where the hospital now stands, kids used to slide down the sandbanks on metal trays. The first inhabitants remember receiving help from the municipal authorities to remove large amounts of sand so that the camp area would be levelled. Burdened with the weight of property, in an undivided assigning already and anyway to each nucleus a part of the entire ownership, these lands for a moment were theatre of revolts. The streets traced in the occupation found in this theatre a form of use, different from the ends to which one wants to let them run.

Of this story there aren’t distinct images. To this day, just two photographs remains of its origins. 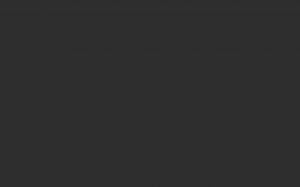 In one. A heap of air bricks stands out with the brightness of its whites and the regularities of the shapes on the cut. Among the pebbles and the soil cracked by the sun, sparse bushes (xxx) and tussocks cover the different levels of the field. A young man crosses the field, he holds in his hands a wooden plank as a trapezist, but his head is facing downwards. The horizon is out of focus and closed with a stripe of huts, squeezed one on the other and bounded by the clothes waving to the sun. Among the drifts of soil: two kids and on the opposite side three women, two of them with the hands on their hips and a headscarf. From the background, not so distant from the houses, between the knot of women and the two kids, a man, protecting his forehead from the sun, from the highest drift, observes us. 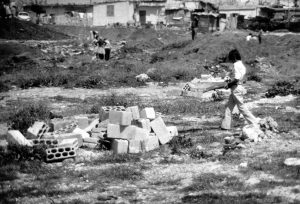 In the other. A few bushes, mostly fleeing toward the horizon, cutting it with the sky. The air bricks are now arranged in small groups, almost creating totems, caught out steps (in fallo). The soil washed out by the rubble: or maybe the photograph evaporates in the sun. 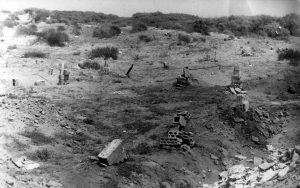 Al-Rumûl. It will sound familiar to some, more then a place would bring back to the expression a sequence of stories, differently ordered depending on the possibilities of enunciation of the same one. For others it will be simply an error. The error seems to be purely formal and one often tries to exile it in the sentence: sand has only a singular form, hardly plural. Al-Rumûl, le sabbie, The Sands, Les sables, Sände.

We follow the error and prefigure a space resembling it, but which is not properly the same. A space where, in an optic-visual extension – cut from a possible trajectory or a crossing – one tends to linearity. Complexity is perceived almost exclusively in the infinitely minute. In this space it seems this functions in the same way also for the colours. A space that tends to nudity and still not yet bare of life: here it becomes persistently, life is seized in being able of doing without and in the rarity of what gives to it substance.
A space that growing in extension, little by little nourishes and radicalizes in itself nucleus increasingly uninhabitable and untraversable.
Are the city and its profile behind?
What remains of time here? History is not infinite in itself, but crushed in infinitesimal crumbles dusting each past instant. So days alternate, countless. Each step becomes potentially decisive and no prints remain, just a matrix without inscription.

Gregale, Levant or Sirocco, the wind coming from East blows towards West. In the prefiguration, the idea of the desert beats down on the Sands. But between these equivocal centres there isn’t a sharp separation and with a further thought, after all we didn’t move so much over.
Here the whites cannot come, since from here they didn’t yet go away, no dust, but a desolate expanse of edifications.

Are the city and its profile behind?
Sometimes it seems to see this Berlin sky fading in the desert sky. 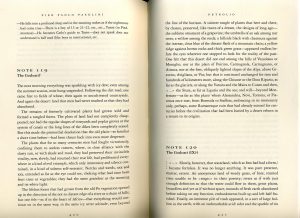 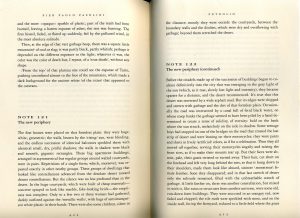 Another voice. I would have written the story of seven cities, but in defiance of destiny I ended up telling the revolt in the desert. And it would be illusory to think that it was exclusively a matter of passage: formal or informal.
We didn’t move so much further. As in that wasteland where the waste is just a repetition of a form, where the thick silence is not but air enveloping and penetrating each hiatus.
In this desert we’re not yet outside, we are led, still led elsewhere by the self. Last frontier of mapping.
But at the end, which sort of map did the one of the desert become? Naming, dot by dot, in the accumulation of debris, the desert grew in the eyes: it itself. Bag after bag stuffed with paper, dragged wading, eased opposite on how we could have imagined: in size but not in gravity, rolled up for concealing in themselves.
Still far, from becoming paper. 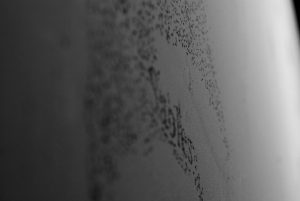 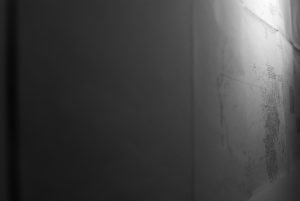 Piano (plane, even, Eve): a subtle membrane, pellicle, whose consistency offers itself in the thickening and diluting of the minute parts [received] on its surface.

The dress seems to be just improperly the film, rather the composition and the decomposition of the minute granules. 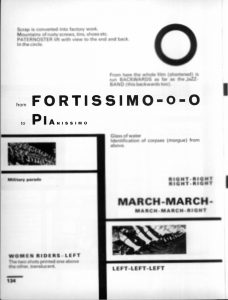 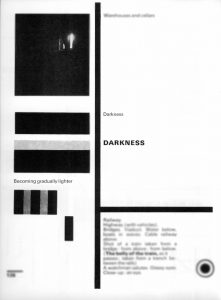 Piano: the dress, which does not cover anything; the dress taking consistency, beside itself.

In the desert. The dresses atrophy, necrotize in the property of names. As in those museums of costume, in the galleries lightened by narrow streams of light, rending the shadow, directing the gaze, they hurry in re-sewing the holes, the edges eaten up by tiny particles, in spreading the textiles out again, so that the membranes will not cast their insubstantial attitude up at the ones who fossilized them in functions.

On the edifications in the desert. There is a way of the plane which crossed particularly arduous vicissitudes.
On this plane: the structural form tried to comprehend the reality of the plane, sewing and unsewing itself in the possible combinations, going as far as to imagine itself as the potential composing; the same execution shifted and that is because the tension between the possible compositions infiltrated more and more in it, making way, gaining time. And in the same way in which the prisoner R., in the jam of the gallows, was multiplied in the anymore (R.) and the not-dead (R.), becoming not anymore properly condemnable, so the composition and the execution open in the middle the time of multiplication; 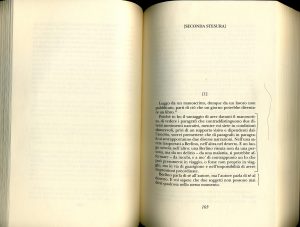 I am reading from a manuscript, that is to say an unpublished work, part from something that could become a book.

Since I have the advantage of holding the manuscript in my hand, seeing the paragraphs (Absatze), keeping the two movements apart and you are in the disadvantage of being without this optical support and being dependent on hearing, I would like to suggest (vorausschicken) that two movements overlap from paragraph to paragraph. That on the one hand I will transport them to Berlin and afterwards into the desert. And one place slips in the other: a Berlin not lived by a person, but by a delirium – by a sickness, one could affirm –, by nightmares, and as a counterpoint an I that can presume itself in a journey, or maybe not really in a journey, but on the way to healing or in the impossibility of having preordained impressions. Berlin speaks about itself to the author, but the author speaks of himself to the desert. And you all know that two subjects can never say something to each other in the same moment. 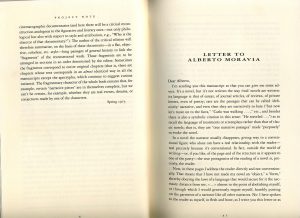 In these vicissitudes the arduous came against the plane:
exciting the vital implications and relegating all the modes to a pure formalism;
against the potentiality of taking shape hurled the never of the undifferentiated, an army of uniformed un-eventual (the so called limbo of the ante-text) and on the other end the reigning authority, infinitely un-appropriable: chronicles of death sentences.
In this way, the edifications in the desert were raised, to protect it from the wind.

Return to the Sands: the revolt in the desert.